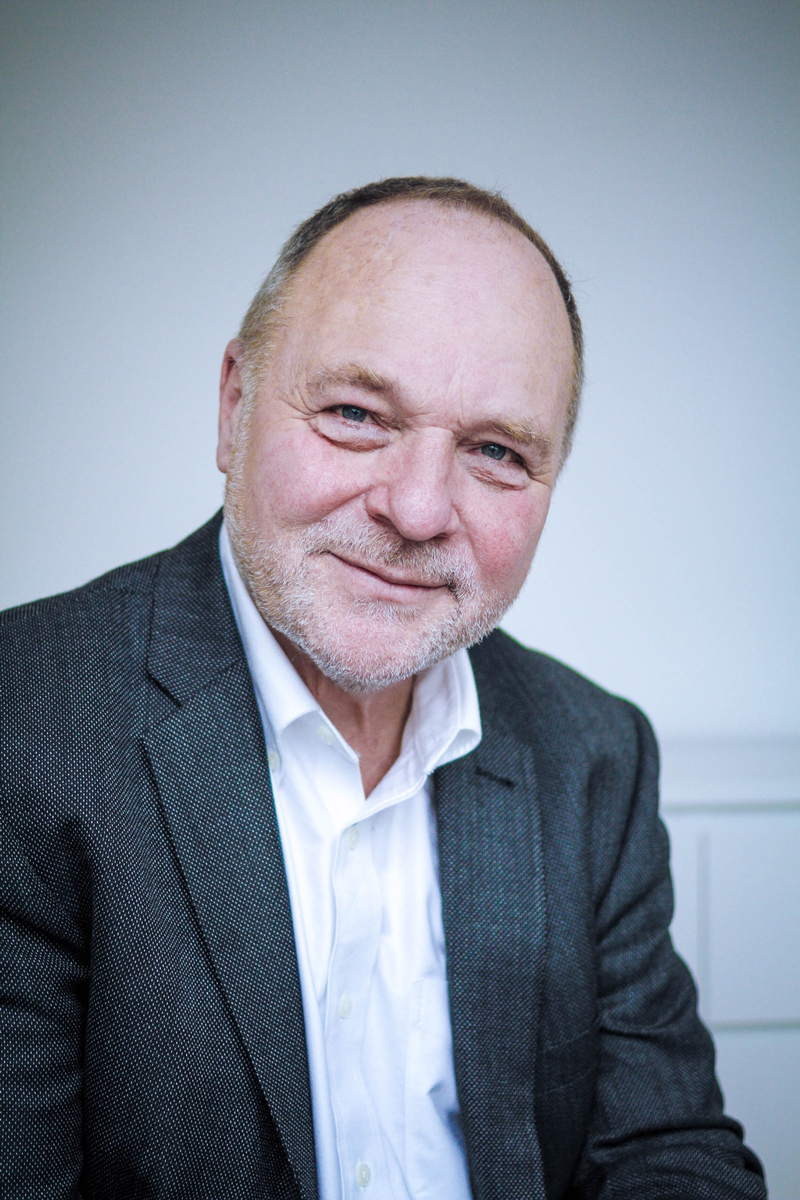 “Cellist Morten Zeuthen revealed at a concert with pianist Amalie Malling he still masters his instrument with fearless intensity … Morten Zeuthen has for many years been one of Denmarks greatest string players …. It was played technically superior, with wonderful momentum, that made one to recall the faith you as a young had, that that you could change the world and shape it in your own image. We sat on the edge of the chairs fearing that we might miss one note tone in this work in surplus in both expressiveness and inventiveness. ”
Christian Times, Jacob Holm, October 2008.

“In Morten Zeuthen excellent sensitivity – and dramatic – cello playing was of special magic and thoughtfulness. It was played from the heart and created a fervent responsiveness  to the audience. ”
Thisted Dagblad, Henry Svane, August 2010.

Temio – meaning three of a kind – is a three movement cello sonata except by name. It is a tour de force for both players with the music driven forward by resolution and adrenaline. It often blasts along. The idiom is tonal and the narrative is dramatic. It dates from just before Koppel’s cello concerto. His tempests are Beethovenian in character with grandeur not in short supply. This is well worth the attention of any listener or indeed any cellist. Composer paralIeis are always crude approximations – here perhaps Prokofiev will give you some very rough idea of Koppel’s soundworld.
21 October 2011 MusicWeb International
Rob Barnett

On double-CD,  “Beethoven sonatas for cello and piano”:

“Morten Zeuthen and Amalie Malling has come up with a magnificent set of Beethoven’s five sonatas for cello and piano. They want something with every node and its context in the larger whole. One can only listen.
Three recordings of these works are published this year, one even with Andras Schiff, but overall I prefer Malling and Zeuthen, with their well-balanced combination of impulsive interaction and thoughtful restraint. ”
Jyllands Posten, John Christiansen, December 2005

“The romantic river, especially in the cello, rose gradually to the high tide in Cesar Franck’s Sonata in A major. It was the two musicians’ strength that they capped the often fragmentary impression of the shimmering impression you are left with after listening to the vast majority of recordings …. The sonata was a kind of romantic swan song. ”
Bornholm Tidende, August 2009

“Nearly 400 students from VUC Nykøbing Mors and high school came close to classical music before the weekend. Did you know that Denmarks most talented cellist is also a friendly and pleasant man?. Morten Zeuthen understand the best way to convey the classical music in words and music for maybe a little inexperienced ears.
– It sounded just as damned good ,as one of the young people coming out from the concert expressed herself. ”
(- With Daniel Blumentahl, piano)
Morso Folkeblad, August 2009.

“Towards better times. Morten Zeuthen was with his springy rhythm, color richness and strong dramatic effects one of this evening’s highlights. ”
Kristelig Dagblad, Jacob Holm, november 2006

“If the reviewer feels apprehensive when faced to another recording of the Bach Cello Suites (there are nearly 30 currently available) then pity the poor cellist…. However Morten Zeuthen has not only the courage, the maturity and the instrument (1680 Francesco Ruggeri) to tackle this project, he has also a unique selling point: the first recording of Bach’s Partita BWV 1013 transcribed for cello…. Zeuthens transcription into D obviously fits well into the hand and I predict a widespread interest in the edition…
There were moments in Zeuthens performance, particularly in the difficult D major Suite, when this line is crossed and one is tempted to cheer the athlete in him when he reached the end of the Gigue….
But when Zeuthen smiles, as in the Burrées of the Fifth Suite the taste is sweet, and at his finest, as in the intense C minor Sarabande, he elevates the moment to a religious experience.”
Helen Wallace, The Strad, 1994

“Zeuthen’s version of  this priceless collection of music for cello places him  automatically amongst  the best thing this country can imagine, and it is genuinely delighted that.”
Bernhard Lewkovich, Christian Times

“After this Bach-release it is not too much to say, that Morten Zeuthen must be counted among the world elite of cellists.”
East, High Fidelity, 1993

“These are the works that separate the wheat from the chaff among cellists, and Zeuthen is certainly among the wheat.
With a strong and profound timbre in his cello, Zeuthen is able to combine the expressive and the meditative.. Beautifully inward music to purge ears and soul.  Should be enjoyed in the dark ”
Jacob Wivel, Ekstra Bladet 1993

“The soul of the cello revealed.
When the angels entertain each other, they play Mozart and Handel, but for God, they play Bach. Is there any wonder that I felt like in the seventh heaven during Morten Zeuthen’s solo concert Sunday afternoon … ..
Once again you are moved by  the insistent duality that Bach continually has  woven into his works. Few musicians are as Morten Zeuthen able to stay true to Bach’s musical outline, and still ad so much personality to the music, so the outcome will never be black or white. Morten Zeuthen works with Bach’s grays and vibrant color flashes, and the Gods have to listen carefully.”

About the CD “Cello and Piano”, Danish Late Romantic Music

“Zeuthen and Malling  play this unfamiliar programmet med Conviction and warmth, their  performance providing expertise and enthusiasm the best possible presentation of this pleasant program. Give it a try I’m happy two have it. ”
American Record Guide, August 1997

“Zeuthen and Malling obviously enjoys to entertain and move their audience, and the interaction is fruitful and extremely musical. It is a witty and highly entertaining  recording. ”
Dansk Musik Tidsskrift, No. 4 1996/1997.

10 out of ten possible points, both in artistic and technical quality
“Cellists are seeking substantial modern solo repertoire stand here with a host of good opportunities, including the works on this disc of music by Danish composers … ..
Morten Zeuthen fearless technique and energetic drive provides easy reference standards for a work that deserves far more attention than it has had outside of Denmark … .. Again, Morten Zeuthen embraces the score from head to toe in a passionate, communicative performance. There is great music in store here, as you can get acquainted with a fabulous cellist. ”
Classics Today, Jed Distler, March 2006.

Other concerts and recordings

”The performances of the soloist Morten Zeuthen (for whom the piece was written) are utterly gripping” om Gudmundsen-Holmgreens “for cello og orkester”
BBC Music Magazine, September 1997

“He’s known as temperamental – and friendly, insistent – and full of charm, not least as gory storyteller when he brings his instrument.”
Politiken 2001

“He has the rare ability as a musician to make even the most difficult things look easy and logical. That this sounds simple too makes him an even greater performer.
It is with cello in hand Morten Zeuthen has struck one blow after another for the music that stands close to his heart. This can clearly be heard in his playing from the heart: both lyrically and temperamental – with a dramatic twist. As such, Morten Zeuthen a fiery communicator of classical music. Not only through his cello playing, but also by all the times he expresses himself in writing. ”
Berlingske Tidende, June 2001

“The audience’s enthusiasm was warm and genuine, even if Herman D. Koppels Concert for cello and orchestra is relatively new and unknown repertoire. The Concerto’s three movements is borne not least by the large solo-cadenzas.  Zeuthen, with its dedicated playing,  effortless virtuosity and deep empathy with the work’s style and spirit – gave a performance which also seemed to inspire the orchestra to an integrated performance. ”
Jyskevestkysten, January 2002

“Bobby McFerrin got just more and more sovereign the fewer musicians he had on stage …. In “Tony Vivaldis”  Concerto for two Celli and orchestra  McFerrin had a hard time to match the warm and beautiful cello-playing from Zeuthens real cello. This concert also marked the coming celloprofessors parting with his orchestra. ”
Politiken, Anders Beier, June 1997

“Morten Zeuthen plays this with his wonderful ability to shape sound and phrases, so that the music is both clear and compelling”
(Per Nørgårds works for cello solo and duets with violin and guitar)
Berlingske Tidende, May 1995

“The young audience that filled The Second Opera to bursting responded with spontaneous applause, and Morten Zeuthen, who was the fascinating cello soloist in” The Rolling Force” got his well-deserved share of the applause. ”
(About Lars Heegaards cello concerto)
Jens Brincker, Berlingske Tidende

“Danish music with cello and computer. Delicate piano effects and intense outbreaks.
Morten Zeuthen interpreting modern and yet very catchy music by Per Nørgaard, “Solo Intimo” in the auditorium of Fachhuchschule …
In another solo, the “Bravour Studien” by Poul Ruders cellist Morten Zeuthen besides displayed virtuosity also musical humor. ”
Westphalian Rundshau, May 1998

“Morten Zeuthen is unpertubed, giving a masterful performance. In the  Prelude’s bleak contemplations he plays with a persuasive warmth and a rich purity of his tone, and he captures the torturous scamperings of the Passacaglia’s cadenza with authoritative ease”.A (CD recording of Bo Holten’s Symphonia Concertante)
Catherine Nelson, The Strad, 1992

“Now it is fashionable to go to classical concerts, and for this a musician as Morten Zeuthen must be thanked. He represents – in the finest way – this generation of artists that, through radio and television, recordings and concerts, have been able to renew the chamber music’s image, so that the posh no longer block the qualities ”
Jens Brincker, Berlingske Tidende, 1995

“And Per Nørgårds 40 years old cello sonata premiered by Morten Zeuthen, here in a revised edition from 1953, explores a themes destiny  through three growth stages …
It is amazing that this work has lain for 38 years without any Danish cellist has put it in the repertoire. What wealth or the poverty.
Morten Zeuthen completed this convincing presentation of new Danish cello music with Bach’s 6th solo suite, played unerringly safe, with a clear characterization  of the different movements, and with a momentum that made the suite to fly. It was cello playing at  festival-standards.
Berlingske Tidende, Jens Brincher, August 1991